Kim looks out the plane window at the illuminated clouds, and thinks of love. This is her 15th visit to Chile, to see Pato, the love of her life.

It all started by a chance meeting on an online forum, some kind of misunderstanding about post office etiquette and money, but Pato’s warmth and tenderness during that fateful first meeting swayed her. There was something about the love of a south american criminal, and the love of his 27 lackeys, too, that opened new horizons for Kim until they meant the world to her.

Sure, Pato makes her wear the schoolgirl uniform, and plait her hair, but Kim does not really mind. Her mother did not know how to keep a man, an unfortunate drama that led to Kim spending her formative years in a single-parent family, with all the disadvantages and lifelong trauma this entails. Kim was determined not to repeat her mother’s mistakes, and instead puts the man’s demands first.

After all, Kim, despite her surplus lard, pimples, and pimple scars, was still posh totty in Chile, with her stunning curves and flowing golden locks. Oh how she relished the looks on the faces of the other druglords, smugglers and murderers when Pato waltzed in the dogfights and cockfights with her at his arm, her voluptuous figure shimmering in a low-cut, see-through cocktail dress.

Kim opened the first of the three bags of peanuts that the air hostess dropped in her lap. Other passengers only got one, but there was simply something in Kim’s appearance that made it clear that just the one would not be enough for her…

She was still kinda worried. Even though most of Pato’s gang respected her and made her feel like a real woman, Juan and Carlos were a bit too rough, and, occasionally, and although Pato had repeatedly warned them, they would wait for everyone else to fall asleep and then have their way with Kim.

But Kim swept those unnecessary negative thoughts out of her mind. Chile’s golden sunsets, and warm embraces awaited. In a few days, she would be back on the plane, with a small crimson ring in her panties, gallons of raw protein in her belly, the glow of a thousand suns on her face, and, most important of all, the knowledge, deep inside her heart, that somewhere, someone loved her.

A Valentine’s Day tale with a moral.

Lord Vicar have been hard at work trying to recreate the success levels of Kimi’s previous band for the third time, and since they’re not recluses like Sami, they have been very generous with their facebook posts…

Through them, we learn that drums, bass and guitars are all in the can.

Drummer recording drums. Good with us.

Serial muncher posing with bass. Mmmkay. Whatever keeps him from the donut box.

Wait a minute! I hear you ask… Where was the bass player in all this? 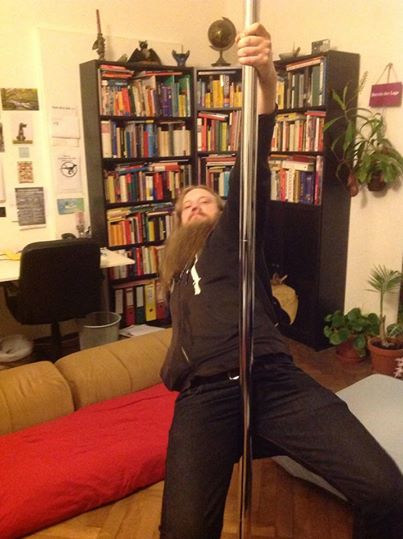 We literally can’t wait for the new album. Not only will there be real bass this time, but also the lack of new episodes of The Office (UK, of course) has left us wanting some dapper comedy.

And if Lard Vicar cut down on their mouth stuffing/couch potatoing just a little, perhaps they can then fit two whole band members in one photo. On health concerns alone, we’re surely hoping.

Citizens of the picturesque Turku city of Finland are distraught as gyms are turning into fast food joints and bakeries almost overnight… “I walked into what used to be the aerobics temple where I did my plyometrics and rigorous cardio”, says local resident Petteri Vicaraki, while sucking on his triple choc milkshake, “and I walked out with three dozen doughnuts, five jammy scones and a 2kg marzipan log. This is madness!”

“It’s a terrible situation all around”, says voluptuously-bodied Rauta Vasara, Petteri’s neighbour, while munching on a chocolate-dipped dough ball he just pulled out of a bag of twenty. “There’s no way out. I am forced to sit on my mom’s sofa, playing video games, smoking pot and snacking, 24/7.” Huffing, he bends to pick up a 12″ vinyl-sized lolly that fell out of his goody bag. “I will never fit into my bathing suit this summer!”

While the citizens of Turku are united in their plight, others have remained skeptical on the matter… “Not that I’m into conspiracy theories and stuff, but this is clearly a full on government plan to prey on the skinny and promote obesity”, says Dilbert Bonkero, a citizen of far away Lohja. “The unenlightened will have no choice but to get fatter and fatter, while the truly enlightened, like me, will maintain their model figures on a diet of moths and boiled newspaper. It’s a struggle, a battle of spirits, a head-on challenge for the well and truly informed citizens that don’t simply believe everything that is spoken to them, unless of course it’s told by a vagina owner from Chile”.

Dear readers, should you happen to be in Turku, please seek out a functioning gym, where Petteri can shed some pounds for the glamour photo shots of his new album. And let us know if they offer a 2-for-1 subscription scheme, in case Rauta wants to join him. Leave a comment, and we will forward this much-needed info to them.

The Gates of Flesh